I’m always looking for a reason to add to my collection of cowboy boots. Now there’s more to this story and while this blog is really about neurodevelopmentally informed interventions and I’ll get there in this one, just let me set the scene a little.

There I was in Denver – a little over a week of being in the States and well I hadn’t really packed for a cold snap.  In fact, despite what seemed to be seamless organisation in relation to my packing – I really didn’t consider or even think about researching the spring weather conditions for places like Denver, Banff and Calgary.  So after a 102/38 degree day in Wichita, I head to Denver – where it was a crisp 63/17 degrees and my footwear is pretty much a pair of canvas Toms and two pair of open toe summer sandals!  This coupled with a Facebook post from a dear colleague in Calgary showing their spring snowfall (looks like our winter on the ski slopes) resulted in a rapid move up the arousal continuum to a state of mild stress activation.  “Will it be like that when I get there in June ?” “I’ve only canvas and open toed shoes, hello frostbite…”  and then as I engaged some self regulation, calmed and regained access to my thinking brain, came the problem solving “…Hello Boots!” On that very same day I get an email from Cal Farley’s to let me know that I’d be doing a trail ride – on a horse.  It is meant to be and now the deal is sealed, new boots for me!

I haven’t ridden for over 23 years, so the idea of getting back on a horse caused me some apprehension, however in the last two weeks I’ve now had opportunity to do two trail rides, firstly with Sandhill in one of the most picturesque canyons, secondly at Cal Farley’s around the treatment centre campus.  I’d love to be able to tell you that it’s just like riding a bike and one of my observers suggested to me that it looked just like that – on the back of that animal although – that’s not how it felt.

The mere idea of getting back up on horseback was in and of itself anxiety provoking for me.  I’m not a lover of heights, and well I’ve put on a bit of weight since I was a kid riding and being a lover of animals was quite concerned about my horse having to bear my weight.  On both rides what was fantastic was the reassurance from experienced horse handlers that both of my horses were more than capable of carrying me and doing so safely.  The other thing that I loved about both Dacodah and David was their ability to scaffold a feeling of competence and in turn begin the process of co-regulation of my anxiety.  I couldn’t help but think about what this experience would be like for a child or young person so used to negative human interaction, to have both an animal and its handler working together in the most natural of ways and leaving you feeling nothing but important and what’s more, even with skill.

Once on the back of the horse, there was no going back on either occasion.  In fact on the first ride there may not have been any going forward either had the horse not clearly communicated to me that I was anxious and she was not enjoying that experience.  My horse kept looking at me and snorting almost with derision.  Initially this did nothing to quell my anxiety and left me thinking all sort of negative self talk about my weight and the horse’s experience of it.  Not unlike the float tank, it was interesting to notice the thought processes that emerged about myself and the importance of sorting that stuff out or at the very least challenging it, for the success of the experience.

Dacodah and David on both occasions reminded me that the horse, being a prey animal, have an overactive stress response system – not unlike the abused and traumatised kids we work with and that they are finely attuned to threat.  Sensing my anxiety both the horses had started to become a bit “on edge” really just feeding off my own anxiety.  So in order to calm them, I had to calm myself.  The horse like the frightened and traumatised child, at the heart of it, really wants a calm, regulated, nice, nurturing, rewarding rider who can take control and be respectful of them.  The more I was able to manage my anxiety and relax into the animal while at the same time retain a sense of confident control the more attuned the horse and I became, the more responsive they were to me and the more confident and skilled I felt.

I can only imagine living a life where you feel out of control all the time and then having an experience like this where you have capacity to control the success of your interaction.  Yeah sure we could argue that our kids have capacity to control the success of their interactions with us all the time, but the immediate feedback from the animal that is without judgement, mixed messages and completely non verbal is so very powerful.  If you don’t get yourself sorted and regulated then your horse is going to do what it needs to take care of itself. There’s not going to be responsivity, let alone the chance of working together.   I watched young people who got this and were able to, in the moment, do what they needed to do to have a successful and pleasant ride with their horse.  I also watched other young people struggle to manage themselves, then end up more dysregulated when their horse wouldn’t do what they wanted, making the horse even more non compliant and not interested in the process.  I could absolutely see the benefit for in the moment reflection and wondering about the experience with the kids and the power of experiential learning when observations and interactions could be reflected on and internalised.  Aside from the physical sensory experience of riding there is definitely something in this equine based work!!

Not so new anymore 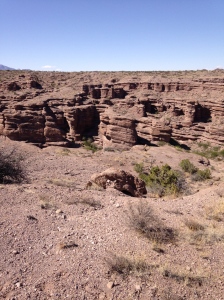 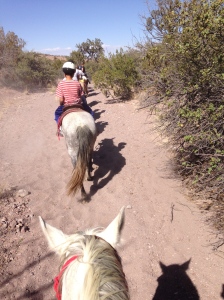 A Self Portrait on horseback

More of the Canyon

Pictures do not capture the beauty of this place